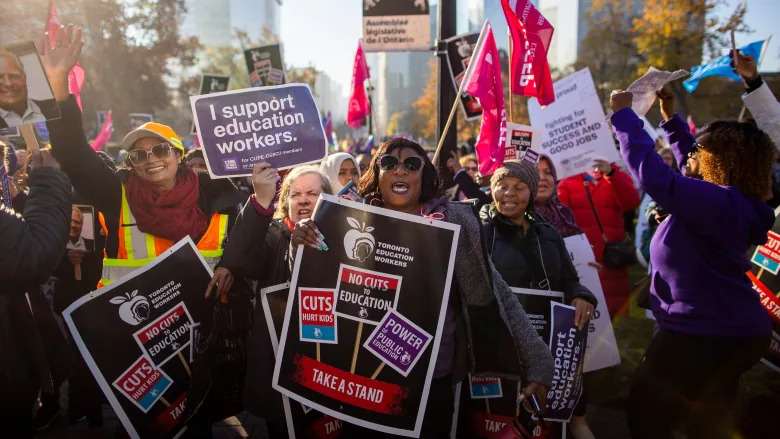 On Friday November 4th and 5th, Ontario’s CUPE education workers striked, asking for an increase in pay. CUPE workers are the people who keep schools open, working and safe. Custodians, secretaires, early childhood education workers, and many more who are working in Ontario’s publicly funded schools. The union was asking for a 11.7% raise. Over the last 10 years CUPE members have only ever received a total of 8.5% in raises, meanwhile inflation has gone up by 32.47% over the past 10 years.

When the CUPE union threatened to go on strike in early November, Premier Doug Ford put in place the notwithstanding clause in order to pass and create a new bill, one which focuses on keeping kids in school. The bill banned all CUPE members from striking, making it illegal and fining striking members $4,000 a day each and $500,000 to the union daily.

On Friday November 4th, CUPE members and supporters gathered at Queens park to picket and protest. Lisa Smith, a parent and member of the electrical union IBEW local 353 who attended the event says “The issue with what’s going on right now is when they use the notwithstanding laws, they’re putting everyone’s rights in jeopardy, it’s not just CUPE its every single worker in the entire province.”

Karen Viray, a french early childhood educator and proud member of the CUPE who has been with the TDSB since 2015, talks about how she would rather be in a classroom with kids, however striking is something that has to be done for survival. “Unfortunately it’s hard to survive living, with the kind of money that we are being given, and honestly I would rather be in a classroom than being out here. The government and Ford should do something about this cause it’s just not right.”