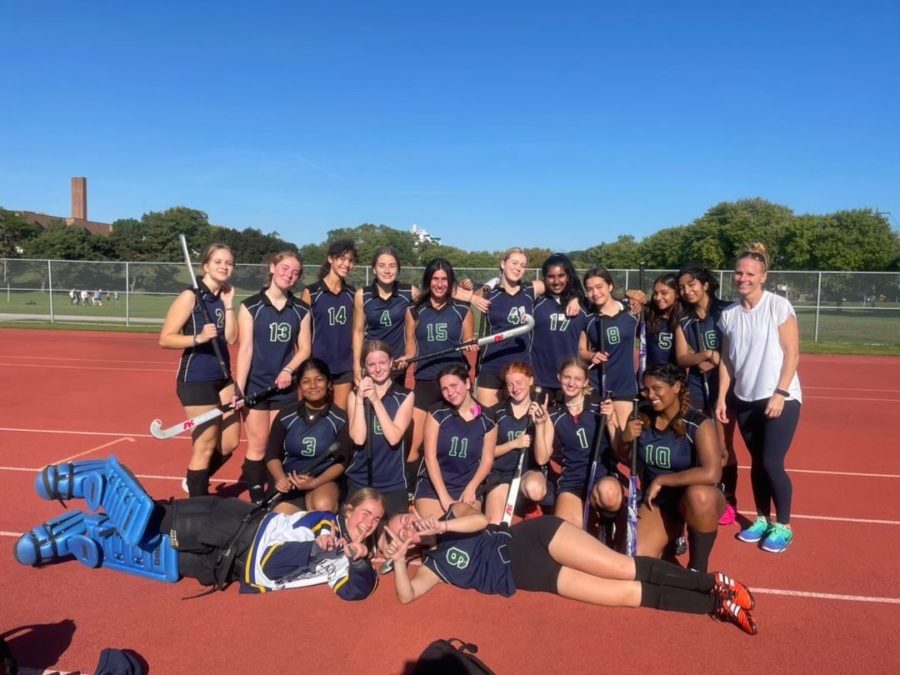 After the two-year gap during the pandemic, students have finally begun to experience a typical year in high school. This typical year includes clubs, teams, councils, and of course sports. R. H. King has already started up several sports including, boys volleyball, girls basketball, cross country, and girls field hockey. Girls field hockey is a sport that was extremely unknown to the King population. Not a single student had played it professionally.

Yet when the announcement was made, the meeting was packed for sign-ups. Girls who had experience in soccer, hockey, and even track and field had come to see this new sport upstart at the school. When the team was selected, the girls played a favorable season. Winning their first game 1 – 0 to Mowat, and then proceeding to tie Wexford and falling short to John A. MacDonald.

The final season game was on Monday, where the girls faced Birchmount. Birchmount were undefeated, with nine goals under their name. The team went in as the underdogs of the game. The first half King played strong defensively as the ball remained on their turf. However in the second half they were determined to defeat the odds. The ball ended up in the turf of Birchmount for the majority of the second half. With Natalia Mangos shooting a goal in a short corner advantage, the team celebrated. However the goal was remanded as it was shot following a whistle. The girls were determined not to give up however, holding off Birchmount for the rest of the game. It was a tie, Birchmount did not win but in King’s heart they won.

The girls played a tough game and officially made it to the semi-finals of the playoff season. Semi-finals were on Wednesday, King was facing John A. MacDonald. The only team they had fallen to, about a week prior.

Headstrong the girls went into the game knowing the weather was going to be rough. Birchmount was already on the turf facing Mowat in their semi finals as King was warming up. Birchmount won in a shootout, without a shock to the girls.

When refs called, team captains Carly Page and Bellamie Miller went for the coin toss. The team was ready to face the odds. Within the first five minutes of the game, it was rough. A short corner was called immediately, and during it several injuries began to occur.

It was clear this game was rough, and a difficult battle. The rain began to pour, wind was blasting and the turf was soaked. One of the key defensive players had been taken off the field due to her injuries, and the game began to show less and less hope. However the girls did not give up. Soon they began to play as they usually had, an aggressive competitive game, where they did not lack. Unfortunately falling short during the game, the two teams went into overtime. Ten minutes later and still there was no score.

It was now the true test, a shootout. Robyn Raine, the team’s beloved goalie, walked to the net with an immense unimaginable amount of pressure on her shoulders. The five selected to shoot were too, under a lot of stress.

Shots were made, and amazing saves were made too. However, unfortunately the girls fell short. The season had come to an end as MAC had handed the King girls an early ticket out of the playoffs. While disappointed, the girls remember heads held high as the short season was played extremely well. While none of them had experience playing the sport, they all played like true athletes. With rigor and strong work ethic R.H. King Academy should be proud of the Girls Field Hockey team as they played such an amazing season, with unimaginable challenges.