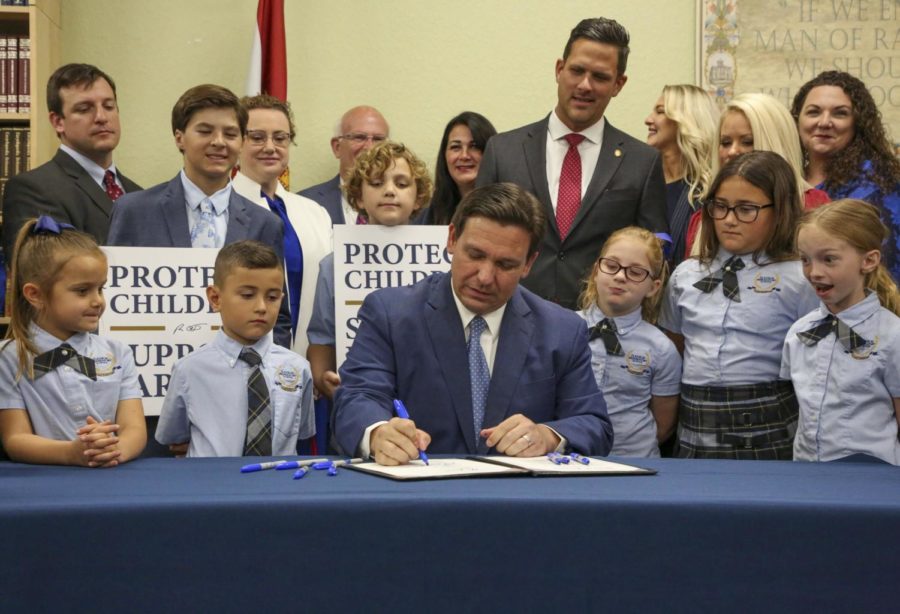 The bill states, “Classroom instruction by school personnel or third parties on sexual orientation or gender identity may not occur in kindergarten through grade 3 or in a manner that is not age appropriate or developmentally appropriate for students in accordance with state standards.”

By limiting the discussion of orientation and gender, this bill will overwhelmingly impact education on LGBTQ+ topics. As Gov. DeSantis signed the bill, supporters held signs, “Protect Children | Support Parents.” Although this may seem to be in good faith, the argument of “protecting children” has been used against LGBTQ+ civil rights and legal battles for years, the implication being that LGBTQ+ relationships and people are inherently inappropriate.

The language used in the bill is vague and highly subjective, which is likely to cause disputes among students, teachers and parents. What is “age-appropriate” or an “instruction on gender identity” means different things for many other people. The critical “Don’t Say Gay” moniker stemmed from the fact that an early version of the bill could have limited even saying the word gay, the common example being a teacher not being allowed to explain to students why a classmate has parents of the same gender.

“Classroom instruction by school personnel or third parties on sexual orientation or gender identity may not occur in kindergarten through grade 3 or in a manner that is not age appropriate or developmentally appropriate for students in accordance with state standards.””

The bill would also affect mental health services. It would require districts to notify parents if there is a change in their child’s services related to their psychological or physical well-being, which could risk some students being outed to their parents against their will. This could restrict students from speaking confidently with school counsellors, taking away a safe space for many LGBTQ+ children unable to have these conversations at home.

Queer students at King have a lot to say about the bill and how it could impact queer Floridian students. Chanelle Knox, a student in Grade 9, emphasizes how this bill will make LGBTQ+ children’s self-discovery more difficult. They respond, “I think it’s so pathetic. It doesn’t protect kids, it just makes their journey of finding themselves even harder.” One queer student explained the fear that young LGBTQ+ folks could feel, remarking, “It quite frankly doesn’t make sense. Being uneducated in LGBTQ+ [topics] isn’t going to stop kids from feeling romantic feelings towards the same gender. All it does is make them feel isolated and alone.” A queer and trans student felt that it wasn’t about helping students but instead adults. “Who is it protecting and supporting? Not queer and trans kids and educators.” They explain, “The only people who benefit from this are queerphobic/transphobic adults.”