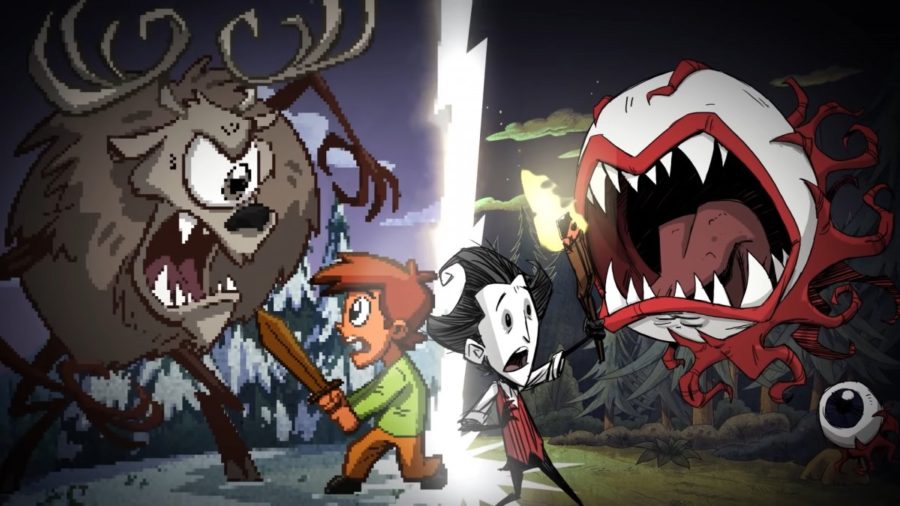 Re-Logic Releases a Crossover Update With Don’t Starve Together

Near the end of last year on November 18, 2021, Terraria developers surprised players with a new update: Terraria x Don’t Starve Together – An Eye for an Eye.

Re-Logic, creators of Terraria collaborated with indie video game development company Klei Entertainment to create a small crossover update that simultaneously adds content from both games to each other. 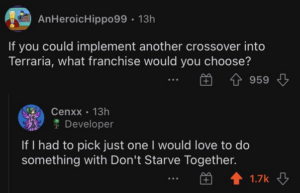 Items in this update include vanity and furniture items, in-game consumables, weapons, equippables, and multiple other small additions. The biggest feature of this crossover update however is the addition of new in-game bosses such as The Eye of Terror and the Deerclops. These additions were teased in the trailer published on the release date of the update.

Additionally, a new adventure world seed exclusive to Terraria was added, allowing players to experience the gameplay of Don’t Starve Together in the world of Terraria. Features of this new world seed include a refresh to the graphics and visuals and giving the game a warmer and duller look, paying homage to the grotesque theme of the Don’t Starve franchise. A new game mechanic exclusive to this seed has also been added where players can now take damage when exposed to complete darkness, adding a new challenging twist to the game.

With this being the third addition to the supposed “final update” to Terraria (1.4 – A Journey’s End), fans are asking, “is this really the end?”. Staff at Re-Logic have been consistently working on this game since 2011 and have officially announced that 1.4 will indeed be their last major update. Cenx, one of Terraria’s main developers stated that she would love to do a crossover with Don’t Starve Together during a Q&A held on Reddit during the game’s 10th anniversary which took place last year. Fast forward a couple of months and that dream has finally become a reality with this update being fully playable and complete as of right now.

As for Re-Logic’s next endeavors, it is currently unknown. However, there are speculations that a sequel to Terraria has been in the works as early as 2012.