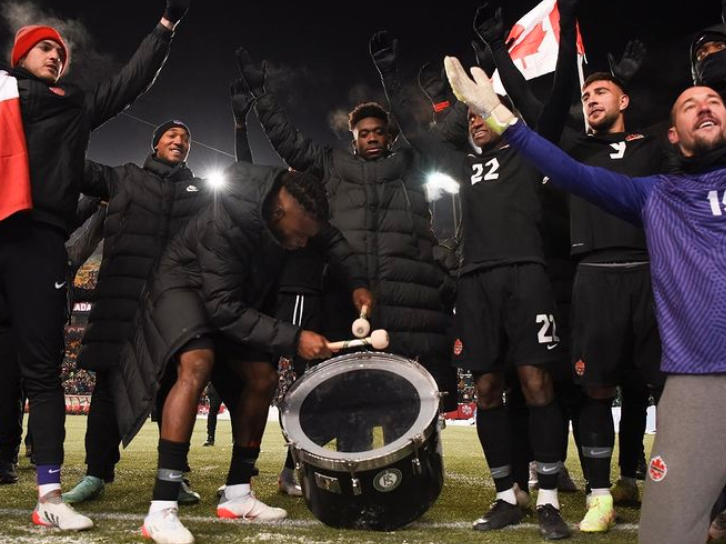 Canadian team celebrates their win with their drum/Viking Clap tradition

On November 16th, 2021, the Canadian men’s national soccer team faced off against the Mexican men’s national team in their eighth qualifying final round match for the 2022 World Cup in Qatar.

The match was held in Edmonton Alberta at Commonwealth Stadium, a strategic choice that played out well for the Canadians giving them a significant home-field advantage. Part of the appeal of hosting the game in Edmonton was that the city is the hometown of one of the team’s biggest stars, Alphonso Davies.

On the night of the game, roughly 44,000 people (of an expected more than 50,000) made the trek to the area despite -14 degree weather and a snowstorm that left snowbanks piled high around the pitch. The freezing weather and snowy conditions led to the stadium being nicknamed ‘Iceteca’. The name is a parody of Mexico’s notorious home stadium Azteca which can produce equally strenuous conditions thanks to its high altitude, blistering heat, and zealous supporters.

The 2-1 victory was somewhat of an upset. Canada and Mexico are both members of CONCACAF (The Confederation of North, Central America and Caribbean Association). Mexico has dominated for decades to the point that this victory was Canada’s first win against the team in 21 years.

I think this is a turning point in Canadian men’s soccer. Mexico was a statement game and for the first time in a long time it looks like we might have a chance.”

Canada’s path through the World Cup qualifiers thus far has been of a Cinderella story. The team currently sits on top of the CONCACAF qualifiers standings with 16 points (four wins and four draws). Canada is ranked 40th in the FIFA world standings, far behind Mexico (14th overall) and the United States (12th overall). The team still has six matches to play in 2022, but they are proving themselves to be serious contenders.

James Davies is a grade nine student at R.H. King Academy who has been following the team through the qualifying rounds. When it comes to the team’s World Cup prospects, he says, “I think this is a turning point in Canadian men’s soccer. Mexico was a statement game and for the first time in a long time it looks like we might have a chance.”

The game was scoreless until  45 + 2’ when striker Cyle Larin seized an opportunity on a rebound defeating Mexican keeper Ochoa. Then, miraculously just after halftime, Cyle Larin did it again by tapping in a pass from midfielder Eustáquio. Consequently, Larin tied with Dwayne De Rosario for the team’s goal-scoring record with 22 goals. In celebration, his teammate Sam Adekugbe went viral for his quintessentially Canadian, ‘snowbank celly’, jumping into a snowbank on the side of the field.

Towards the end of the game, tensions were running high when Mexico’s Herrera headed in a dramatic 90th-minute goal. Ultimately, Canada held onto their lead through the end of injury time thanks to a fantastic goal-line save by Canadian keeper Borjan. After the game ended, an altercation broke out until the Mexican team eventually left the stadium and the Canadians moved on to celebrate with their eager fans.