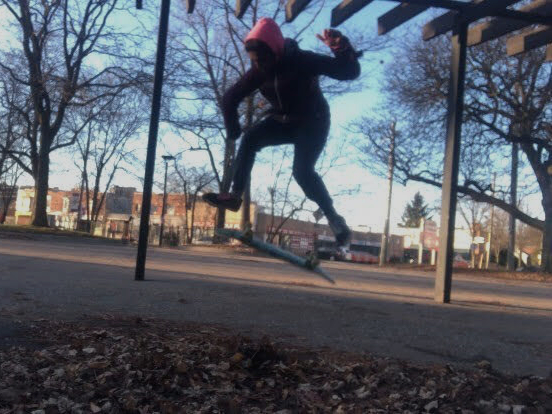 Trick skateboarding as a woman and a person of colour

Skateboarding has been growing in popularity for decades and is still seen with no end anytime soon. Looking cool with their kickflips and backside 180s, many teen skaters have approached skateboarding as a form of stress relief, exercise, and determination. However, stereotypes and gender biases are still a substantial part of skate culture, as it has been for decades.

Skateboarding was mostly male predominant during the 1950s, and to this day, the gender bias trend still stands. 77.1% of skaters are male, while 23.9% are female, according to the Public Skatepark Development Guide. Grade 11 R.H King Academy student, Rida Ahmad, states how being a girl and a person of colour contributes to her experience as a skateboarder in a skatepark. “In the beginning, the skatepark was extremely intimidating since I was one of the only brown people there, not even taking into consideration the number of girls skating.”

A stereotype where girls at skateparks are considered “posers” is also another typical insecurity for Rida. In skateboarding terms, “poser” describes a person who does not practice trick skateboarding but is at the skatepark for the sole purpose of gaining attention or impressing others. Not every girl at a skatepark is a poser, but from Rida’s experience, the term is more prevalent when regarding a girl. Some people in skate culture have intoxified some aspects of their culture, naming new skaters posers, which is why Rida doesn’t accept the use of the term as openly. Even after learning how to kickflip and do multiple other tricks, the “worry and insecurity” about being called a poser doesn’t disappear from Rida’s mind.

The pandemic has worsened physical and mental health for all ages and, for Rida, skateboarding plays a considerable part in her health during this unusual time. “My [skate]board has been the only exercise following COVID since it’s the only thing I can do alone while having fun at the same time.” Skateboarding acts as both a stress reliever and a physical activity for her. It incorporates exercise with new, but sometimes tedious, thrilling tricks. Rida says that first-time skate tricks are embarrassing, awkward, and difficult, but overcoming them gives her unconquerable motivation.

Prominent characteristics of skateboarders are their learned patience and visible determination. Rida started her skateboarding journey when quarantine recently began and couldn’t stop from then on. She emphasizes that skateboarding can act as an outlet for all negative emotions as well as teach valuable skills. “Skateboarding has been there with me during my worst times so it almost feels like [skateboarding] is a part of me. It taught me more about myself than I thought was ever possible. A piece of wood on wheels can change someone’s life and lifestyle.”

The scrapes and bruises on her shins, the unshakable patience, the countless hours of practicing, and the joy that comes after landing a trick are what Rida loves most about the activity. Her personal narrative cannot be without her skateboard since it has become a significant part of her identity and lifestyle. A year of practice has passed and she can already do a lot of tricks, but Rida knows that she still has a long way to go.