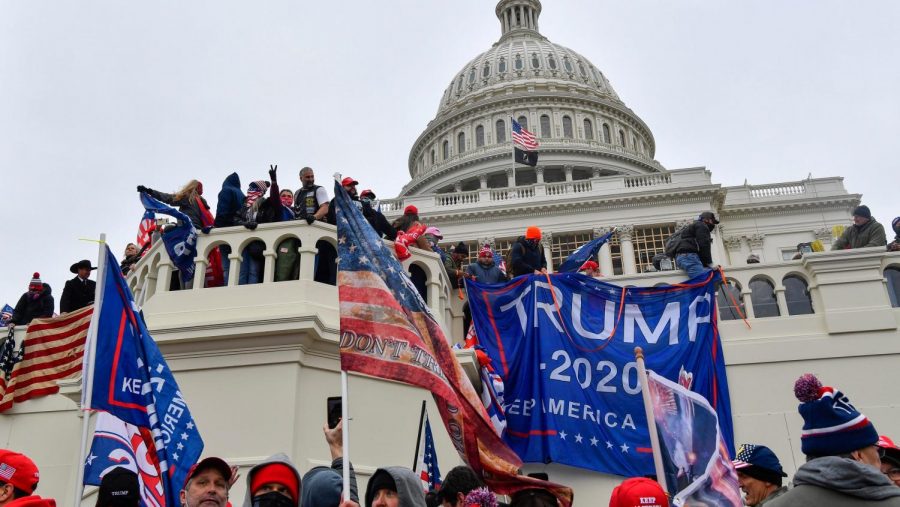 Rioters sought to prevent the certification of President-elect Biden's victory

Chaos and violence erupted at the U.S. Capitol on Wednesday as thousands of supporters of President Trump gathered outside the legislative building to protest against the certification of President-elect Joe Biden’s victory in 2020 presidential election. The crowd broke past barriers set up along the perimeter of the Capitol and got into physical altercations with Capitol Police. Rioters then proceeded to breach and storm the halls of the U.S. Capitol Buildings. Both the Senate and House of Representatives were forced to evacuate as the mob descended further into the legislative chambers. The office of the Speaker of the House, Nancy Pelosi, was breached along with the Senate floor. Rioters smashed through windows and caused extensive damage to property. A women died after being shot in the chest on Capitol grounds and 3 other people died of medical emergencies with dozens of others injured. 54 arrests have been made thus far.

Congress later reconvened to certify President-elect Joe Biden’s victory on Thursday morning, hours after the pro-Trump mob was eventually dispersed by Capitol Police. House Speaker Nancy Pelosi condemned the violence in a statement issued on Wednesday, “Today a shameful assault was made on our democracy. It was anointed at the highest level of government. It cannot, however, deter us from our responsibility to validate the election of Joe Biden,” Senate Majority Leader Mitch McConnell also stated on the floor of that the “United States Senate will not be intimidated. We will not be kept out of this chamber by thugs, mobs or threats.”

The three largest social media platform, Twitter, Instagram and Facebook have taken action and deactivated President Trump’s accounts temporarily, to avoid the spread of misinformation coming from the White House. The President in a tweet on Wednesday accused Vice President Pence, who had rejected calls to use his role as president of the Senate to overturn the election results, of not having “the courage to do what should have been done.” Many have placed the blame directly at the President for inciting his supporters through his repeated refusal to accept the results of the election.

“These are the things and events that happen when a sacred landslide election victory is so unceremoniously & viciously stripped away from great patriots who have been badly & unfairly treated for so long. Go home with love & in peace. Remember this day forever!””

Questions have also raised about the level of security at the U.S. Capitol Buildings. The scene was notably met with less police resistance than many of the Black Lives Matter protests that took place across the country earlier in the year. This has led many to point to a double standard where federal police attacked peaceful protesters with tear gas and rubber bullets in Lafayette Square outside the White House over the summer, allowing President Trump to take a photo in front of a nearby church at the time, while protesters on Wednesday were able to overrun Capitol police and infiltrate the legislative chambers.

In the wake of the violent demonstrations, many lawmakers have called for the Vice President and Cabinet to invoke the 25th amendment to remove the President from office, claiming that he is incapable of performing the duties of his job and is a threat to national security. President-Elect Biden shall be inaugurated on January 20th.