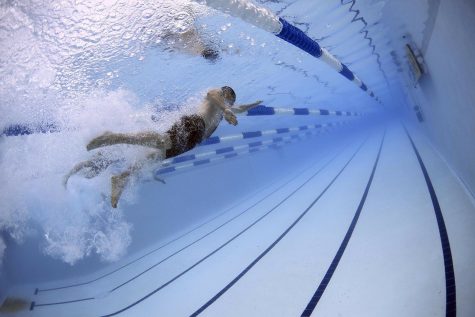 Many high-performance athletes have suffered the consequences of COVID- 19, whether physically or mentally, and it has taken its toll. Many sports such as soccer and basketball have found other ways to replace what COVID has taken away by working on their physique, running, and training their bodies to stay in shape. However, swimmers have a much more difficult challenge, as they frequently train in the pools that had closed down for several months during the beginning of the pandemic. That meant swimmers had to turn to alternatives such as running and strength training. These alternatives however are not as sufficient as swimming itself. As the months have gone by, high-performance swimmers have gotten back into the pool working hard to get back into shape.

It has been challenging as normal competitions and training had been canceled for months, however leading up to the month of October the ISL (International Swimming League) began planning to go on with their annual competition. The ISL is comprised of ten teams of both women and men. The league, due to COVID-19 pandemic travel restrictions, consisted of ten short course swimming meets which took place in the city of Budapest, Hungary. Four clubs take part in a match and an ISL match lasts two days. During the first season, an ISL match consisted of 39 in the 2020 season races: 32 individual, five team relays, and two skin races. Each race consists of two representatives from each of the clubs. Points are distributed after the race in the following manner: 9 points for 1st, 7 for 2nd, and 1 for 8th. Points are not awarded to athletes (teams) who fail to finish a race. In addition, points are doubled in relays and are awarded after each of the three skin race heats. The points of the clubs’ representatives are then added together and go towards the total points result of their respective clubs.

The 2020 International Swimming League grand finale is finally here after more than a month of racing in the Budapest Bubble. After Day 1, defending champions Energy Standard had some catching up to do as they sat in 2nd place with 239 points behind the Cali Condors with 267 points. London Roar is currently in 3rd place (199.5 points) and LA Current in 4th (177 points.)

Cali Condor’s Caeleb Dressel is on triple World Record watch after crushing two World Records on Day 1. He is three-tenths off of the World Records in both the 100 free and 50 fly after he set the ISL 100 free record last week and swam a career-best 50 fly the same week. Dressel already set the World Record in the 100 IM this season, but can he do it again? Kliment Kolesnikov also has a chance to lower the 100 back World Record he set yesterday in the lead-off leg of the Energy Standard 4×100 medley relay.

In the MVP race, Dressel has built a pretty insurmountable lead with a total of 408 points in 1st place. But there are four swimmers within reach of 2nd place with Ryan Murphy (318) tied for 2nd with Beryl Gastaldello (318) and Lilly King in 4th by one-half of a point. Last season’s MVP, Sarah Sjostrom is currently in 5th with 281 points after she missed a regular-season match due to a back injury.

Covid protection measures saw athletes grouped together into their own ‘bubble’ with extra precautions taken to keep them and their coaches protected and safe. Training times and lanes were assigned and frequently sanitized to prevent the transmissions of any sort of germs and viruses. This also meant quarantining and self-isolation. Many of the athletes had to say their goodbyes to family and friends at the beginning of October to travel to Budapest and compete until the end of November.

These strict requirements and rules confined the athletes and no one has contracted the virus, therefore being very effective. The ISL has not only proved to be very successful but provided high-performance swimmers with the missed opportunity of the Olympics to compete at a high level once again.