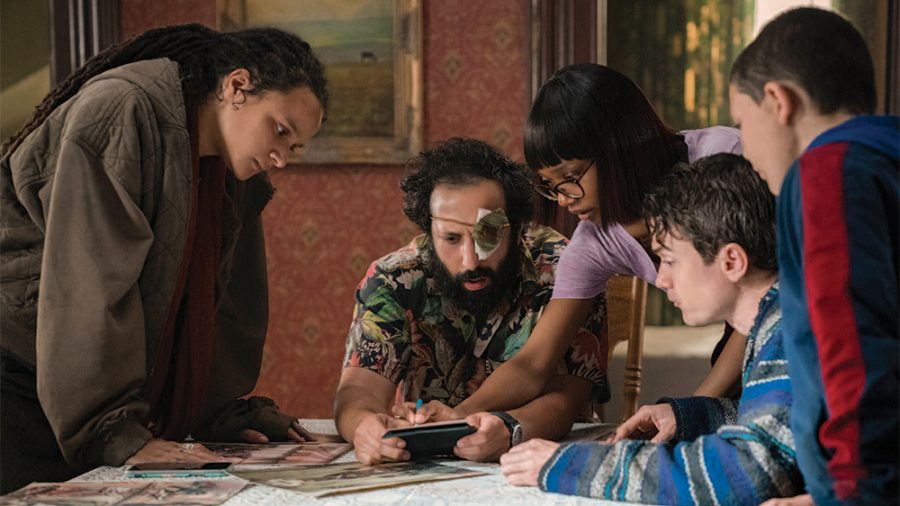 Utopia recently debuted on Amazon Prime and its subject matter is so timely that Amazon felt the need to put up a warning before each episode to tell people that it is “not based on an actual pandemic or related events.” The series follows a group of comic fans who become pulled into a real world series of conspiracies that were predicted in a graphic novel called Dystopia. Once word gets out that sequel, Utopia, is about to be released they jump at the chance to read it and see what might be coming next in the real world. Little do they know that the events in characters in the books are actually real and they find themselves ripped from their regular lives and thrown into the middle of the conspiracy.

The series is anchored by film star John Cusack (Being John Malkovich, High Fidelity) as a highly suspicious Big Pharma CEO and Rainn Wilson (Dwight from The Office) as a scientist who may have a cure for a deadly virus sweeping across America. The rest of the cast is largely lead by unknown actors, all of whom have distinct approaches and personalities, to try and make for as engaging a show as possible.

While the premise is strong (it was adapted from a British series of the same name by Gillian Flynn), the show itself feels a bit uneven. The comic group is largely separate from the medical side of the show which makes it feel almost as if there were two separate series planned and then jammed together. On their own, each side is compelling, but as a constant narrative it feels like a tonal whiplash. As the stories gradually dovetail this might all make sense and work better later on, but early on some viewers might struggle to keep up their interest.

That tonal imbalance comes into the action as well. The violence, when it comes, is often swift, unexpected, and perhaps more brutal than needed. The bad guys are just that, noticeably bad, but the good guys operate in a stranger place. One character, Jessica Hyde (Sasha Lane), is meant to be one of the main heroes of the story but she commits such an awful act within her first hour of being on screen that it makes it hard to feel sympathy for her or the characters who surround her.

Like most shows when they first start, Utopia has both the chance to be excellent or forgettable. Considering it had a lot of source material to work with in the first place, it really should have had a much stronger showing out of the gate. If it gets renewed for a second season, hopefully Utopia will live up to its name and its premise. For now, however, given the subject matter and the timing of events in the real world, it may be a little too similar to provide much comfort or enjoyment to an audience.
6.5/10