Tourism: what is the impact of this on our environment? 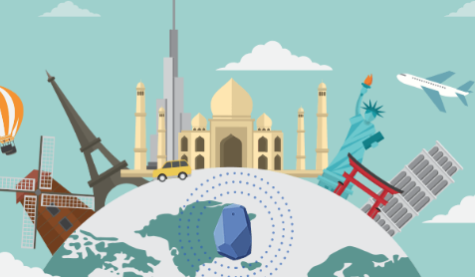 There are over a billion tourists arriving at their destination per year. Tourism has become such a big part of our lives. It is crucial to understand how this impacts our environment. The COVID-19 pandemic has significantly impacted our tourism industry, which is why people are able to have a better glimpse of the impact of tourism on our planet.

Tourism also leads to an increased amount of air pollution, noise pollution and land pollution. Transportation contributes to 90% of the tourism industry’s greenhouse gas emissions. Due to the increase in air travel, more carbon dioxide emissions are being spread. In fact, according to an article, written in 2018 by Nature Climate Change, claims that 8% of global emissions comes from tourism. Not only that, tourism also plays a role in noise pollution too. With more buses, cars, airplanes and more modes of transport being used, this causes a large disturbance for the wildlife around different areas. For example, the changes in noises can change the natural activity patterns of animals. There is also large amounts of waste and littering near tourist attractions, ruining multiple scenic areas. An example of this is the amount of waste produced in the Caribbean each year – more than 70,000 tons!

To add on, there is a depletion of natural resources: with more development in tourism, people are placing more pressure on resources. This becomes a bigger problem in areas where resources are already limited. This leads to a larger amount of extraction for resources in order to fit the needs of tourists in certain areas making the situation worse. A solid example of this is the usage of water resources. For the tourism industry, large amounts of water are used for swimming pools, hotels and golf courses without thinking of the repercussions. With the large usage of water, there is an increase in water shortages and an increase in waste water.

However, despite all the negative effects tourism has on the environment – it’s not all bad. According to UN Secretary General António Guterres, “Tourism can be a force for good in our world, playing a part in protecting our planet and its biodiversity, and celebrating what makes us human: from discovering new places and cultures to connecting with new people and experiences.” Here are some examples of how tourism impacts our environment positively.

“Tourism can be a force for good in our world, playing a part in protecting our planet and its biodiversity, and celebrating what makes us human: from discovering new places and cultures to connecting with new people and experiences.” – UN Secretary General António Guterres

AN INCREASE IN ENVIRONMENTAL AWARENESS

By more and more people going across the world, seeing new places, there is a possibility that more people will begin to appreciate the environment. It gives people the opportunity to educate themselves about environmental problems currently going on. This can cause them to show more concern for the environment. If more people become environmentally conscious due to tourism, it can collectively make a difference. An example of when people became more environmentally aware is in Hawaii at North Shore Shark Adventures. North Shore Shark Adventures takes the time to enlighten people about the impact of certain activities (ocean acidification, overfishing…) on shark populations.

Tourism plays a large role in the protection of natural sites. With more people wanting to visit specific sites because of how valuable they are, national parks are created. They have also contributed to the preservation of wildlife species in Africa, Asia, Austraila, South America, and more. Many countries started wildlife reserves and due to this, some of the animals that were nearly extinct populations have drastically increased.  Not only that, in certain areas, you may be charged enviromental taxes. These taxes, especially in developing areas rely a lot on these fees to manage some of the areas that you are visiting. An example of this is in the Maldives. Tourists that stayed in tourist hotels had to pay an additional fee of $6 USD/day for the country’s “Green Tax.”

WHAT CAN PEOPLE DO?

Tourism has both positive and negative effects on the environment, but an important question is “What can people do?” When travelling somewhere, one can check whether or not the tourism options have been certified as being environmentally friendly: one can check using certification organizations. Some examples are Green Globe and Earth Check. One can also start putting in the effort to become more environmentally conscious and watch out for their environmental footprint.