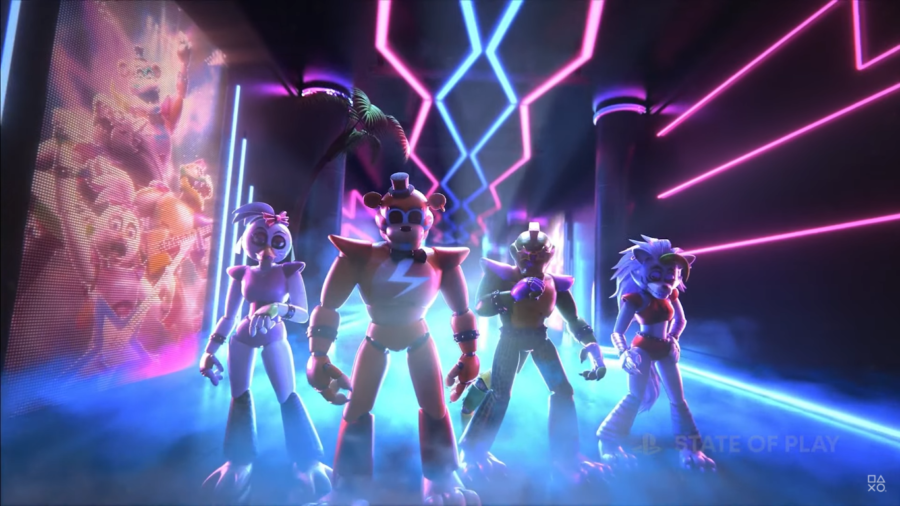 The newest Five Nights at Freddy’s series installment, Security Breach, is a long-awaited game that disappoints fans with its broken mechanics, confusing missions, and bugs, lots of bugs.

Five Nights at Freddy’s (or FNAF) is a resource management game series, where the playable character is a security guard on a night shift when the animatronics that usually entertains kids, come alive and try to attack the guard. The first game was released on August 8th, 2014.

After nine games, one spin-off, fifteen books, and a lot of plushies, Security Breach was announced, the first game in the FNAF series that used a fully free-roam game style.

Security Breach was first announced on August 8th, 2019, on the fifth anniversary of the game series, but after many technical issues, and the creator stepping down, the game was pushed back several times and released on December 16th, 2021.

In Security Breach, the player starts as Gregory, a young teenager who gets trapped in the pizzeria after closing, forcing him to stay overnight. Luckily, he befriends the animatronic Freddy, who helps him survive the night and eventually escape.

Security Breach, like most free-roam games, has to keep the player on track towards the ending with missions and objectives they must complete. Many missions in the game involve the player finding a specific room in a giant pizzeria, which can be quite difficult so a map feature was added. Unfortunately, that map feature only showed the layout, not the actual room needed.

Other missions were so vague that they left players stuck. For example, the mission “return to Freddy” is a common one after the player has found an object needed in a certain area that they need Freddy to get to. This mission gives no actual route of getting to Freddy, which confused many players.

The main issue in Security Breach is the exploits possible. The game has clearly had little to no playtesting, allowing for major bugs and glitches to remain in the game. Even after multiple post-release patches, some of these glitches remain. Parts of the game are so broken that they are unplayable, one of these places being the secret ending where the player is thrown back into a game; similar to FNAF 3 where they have to watch where the animatronics are, and close the appropriate door.

A hiding mechanic was added as one of the animatronics can break down the door. This hiding mechanic (upon the first release before multiple patches) always resulted in the player being kicked out of where they were hiding and found by the animatronics. The entire map can also be unloaded in many, very simple, ways including pressing space when entering Freddy’s stomach cavity, jumping against the corner of a wall, and by some simple parkour. All of these leave the player in the void, unable to continue playing. The nearly seven-hour game can be speed run in just over three minutes by using this unloading glitch.

Overall, the game had so much potential but a combination of being too ambitious and a lack of playtesting resulted in a game that is confusing, bugged, and unfinished. The storyline and characters, while they could use some work, are good and could work well if given the right environment. Unfortunately, Security Breach did not turn out the way many fans were expecting and hoping, but patches for the game are still being released that could help to fix some of the major glitches and make the game more functional.