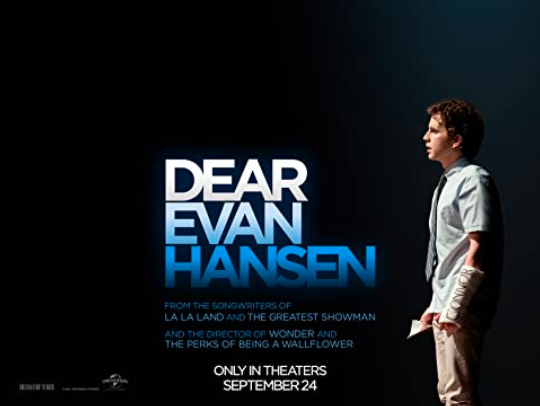 The Dear Evan Hansen Motion Picture is available on-demand starting Friday, October 15th. On September 24th, 2021 the film was released to the public after premiering at the Toronto International Film Festival. Fans of the original Broadway musical have been anticipating the movie’s creation since the musical premiered on Broadway in December 2016.

The film follows the story of high school senior Evan Hansen who struggles with depression and social anxiety and gets caught in a web of lies related to the death by suicide of a classmate. It includes notable songs such as “You Will Be Found”, “Waving Through a Window”, and “Sincerely Me”.

The musical featured a book by playwright Steven Levenson and music and lyrics by the songwriting team Pasek and Paul (the iconic duo behind The Greatest Showman, La La Land, and more). Broadway star Ben Platt got his breakout role playing title character Evan which earned him a Tony for Best Actor in a Leading Role in a Musical, making him the youngest actor to ever do so at 23 years of age.

The production received major critical acclaim and was nominated for nine Tony Awards of which it won six. The material particularly resonated with young audiences and received mostly praise for its portrayal of youth mental health and an unconventional coming-of-age story. The small cast, minimalist set design, and powerful performances, particularly Platt’s emotionally wrenching portrayal of Evan, all ensured that the show received attention from well beyond the world of musical theatre.

Unfortunately, almost immediately after its initial screenings, the film received mainly negative reviews from critics for a multitude of reasons. As this article is being written, it maintains a 30% on Rotten Tomatoes. Ben Platt’s reprisal of his role was a particularly controversial decision as, at 28 years old, many people felt he could not convincingly play a high schooler and that his age was a distraction throughout the film. It is worth mentioning that the film was produced by his father Marc Platt, an incredibly successful producer behind works like Wicked, Legally Blonde, La La Land, and more.

Additionally, the film faced criticism of the content which also plagued the original Broadway production. Many people question the moral implications of the story and particularly how Evan is presented as a character that audiences should sympathize with despite his reprehensible actions and obvious character flaws. Some found the show’s handling of the subject matter to be offensive and the emotional journey manipulative.

However, the audience response to the film was very different to the critics. The audience score on Rotten Tomatoes is 88% and the film shows 4.1/5 stars on Google’s Audience Rating Summary. This could be because the critics used their usual parameters for judgement on a film that was intended to honour a different medium, because the film strikes an emotional chord with people, because it satisfied fans of the original story, or something else entirely.

I was fortunate enough to attend the world premiere of the film at TIFF on September 9th. Coincidentally, the evening of my first day of senior year. Given that the film opens on the characters’ first day of senior year, the similarity felt noteworthy and gave me a unique insight into how realistically the film portrays the experiences of high school students.

As a longtime fan of the show, my excitement was running high going into the screening. The atmosphere at TIFF was energized and almost surreal given that it was the first time an event like this was able to happen in almost two years.

In advance of the film, there were speeches from Cameron Bailey and Joana Vicente (co-heads of the festival), Toronto Mayor John Tory, Lisa MacLeod (Ontario Minister of Heritage, Sport, Tourism, and Culture Industries), and an appearance from the director, writer, and cast of the film. The cast and creatives returned after the screening to participate in a Q&A.

I enjoyed the movie and thought that it stayed true to the original material. The cast provided emotionally resonant performances and delivered the songs well, especially considering many had never participated in a professional musical production before. I actually think that the movie gave me an increased appreciation for the original stage musical.

For me, Ben Platt’s age did not detract from his performance. I was more than able to suspend my disbelief and appreciate his talent and the amount of thought and time that he spent developing the character, regardless of his believability playing a teenager.

The film made several changes in its adaptation from stage to screen, most notably the removal of the songs “Anybody Have a Map?”, “Disappear”, “To Break in a Glove”, and “Good For You” which left many fans of the original musical feeling disgruntled. However, there was a subtle nod to the cut songs in one of the opening scenes in which the school band can be heard playing instrumental versions of “Anybody Have a Map?” and “Good For You”.

Furthermore, the role of Alana Beck was expanded upon and an additional song was written for her character called “The Anonymous Ones”. The other new song written for the film is titled “A Little Closer” and replaces the “Finale” number which closed the original musical.

There were other minor changes made to the characters such as Larry Mora (changed from Murphy) becoming Connor and Zoe’s step-father as opposed to biological father and the portrayal of Jared Kalwani (changed from Kleinman) as an LGBTQ+ character.

The Dear Evan Hansen (Original Motion Picture Soundtrack) is available now on all platforms and features all the songs in the film as well as additional versions by prominent pop artists. This includes “You Will Be Found” by Sam Smith and Summer Walker, “The Anonymous Ones” by SZA, “Only Us” by Carrie Underwood and Dan + Shay, “A Little Closer” by FINNEAS, and “Waving Through a Window” by Tori Kelly”.

Overall, the film is not without its flaws, but I believe that its redeeming qualities greatly outweigh the criticisms. Fans of the original musical will likely enjoy the movie and I encourage people who have never seen the musical to give the film a chance.

If you see the film, feel free to leave your thoughts in the comments below!