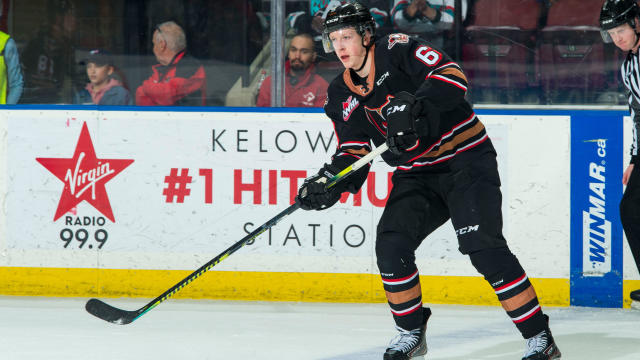 Over the last 4 years there have been many timestamps that mark major moments in our history. The COVID-19 pandemic, the Black Lives Matter Movement, the US Elections and the Taliban gaining control of Afghanistan are just a few. There has been so much death and pain in the last few years that history books will be disproportionately filled with grim events. But if one looks closely, they will be able to see many positive defining moments in society that will influence the experiences of people around the world. These points in time are ones seen in history textbooks in the years after, the catalyst to one of the most profound societal changes. When Rosa Parks refused to move to the back of the bus in 1995 she sparked what is one of the most notable events in African-American history. On Monday morning, July 19th, a new defining moment was recorded; bearing the name Luke Prokop.

Luke Prokop is a Canadian professional ice hockey defenseman for the Calgary Hitmen, a Western Hockey League (WHL) team. In October of 2020 he was selected 73rd overall by the Nashville Predators and less than a year later, on July 19th, 2021, he came out as gay. He is the first player under NHL contract to do so.

This news closely followed Carl Nassibs coming out video, who came out in June of 2021. Carl Nassib is the first active gay NFL player. The two are currently the only active, out, gay players in what is commonly referred to as the big four of sports: the National Hockey League (NHL), the National Football League (NFL), the National Basketball Association (NBA) and Major League Baseball (MLB). Together the two created an outpour of support from all corners of the world and helped make many people’s lives a little easier.

The sports culture is incredibly toxic, especially to members of the LGBTQ+ community. Most sports center around the ideology of ‘tough manliness’ and being gay is often used as an insult. Hockey culture is extremely hostile towards queer players, and often becomes one of the biggest challenges they will have to overcome. But slowly that is changing, starting with Luke Prokop. What he did made such an impact on the hockey world that the wakes can still be felt to this day. Many messages of gratitude are flooding the internet, posts from young hockey players thanking him for making their life a little better.

@lukeprokop_6, I admire your courage and know your story will serve as inspiration for so many.”

Not only did every NHL team post their support in a personal message, but many players did as well. Jacob Trouba, Tyson Barrie, Mitch Marner, Nick Foligno, Oliver Ekman-Larsson and John Tavares are just some of the swarms of people to tweet out with love and support.

What Luke Prokop did will not only serve as inspiration for young players but already has sparked a change in hockey culture. Historically locker room talks and chirps often featured anti-LGBTQ+ slurs and comments. Prominent players such as Anaheim Ducks Captain Ryan Getzlaf and two-time Stanley Cup champion Andrew Shaw have both been caught on microphone using the f slur, with little punishment. Both were sadly just within the last 7 years. But now players see that what they say can, and will, affect the lives of their teammates and they are striving for change.

And while it is worth noting that this progress is still developing, what Luke Prokop did for himself, for the LGBTQ+ community, and for the entire sports community was the catalyst for the coming change. On that Monday morning Luke Prokop set in motion one of the biggest changes in hockey history; a defining moment that will help liberate so many people and set the pace for the future to come.